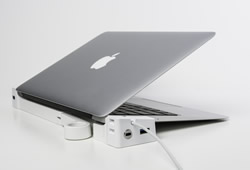 A versatile and expandable desktop locking and docking station for Apple’s latest MacBook that lets you use dual monitors, connect to Gigabit Ethernet, and lock your computer in a single step

Las Vegas, Jan 7, 2014 – LandingZone will premier a new docking station to expand its unique, magical products for Apple users. The award-winning line of docking stations includes a partner for the MacBook Pro with Retina display.

The 15-inch version is available now at LandingZone.net, Amazon and soon through a select number of retailers. The 13-inch model can be pre-ordered on LandingZone.net and is expected to ship in the first quarter of 2014. These new models as well as the rest of the line of docking solutions will be on display at Showstoppers at CES on January 7th in the Wynn Hotel’s Lafite Ballroom, table D4.

The DOCK for MacBook Pro with Retina display maintains the look and feel of LandingZone docking stations for the MacBook Air, while adding three USB 3.0 and two USB 2.0 ports, Gigabit Ethernet, a Headphone port, a MagSafe 2 holder, a native HDMI pass-through, and a Mini DisplayPort that can be used with Thunderbolt and Thunderbolt 2 devices and monitors. The computer connects to the dock and all of these connections in one single step.

The LandingZone 2.0 PRO works with the recent MacBook Air 2012 to 2013 and docks four USB 3.0, Gigabit Ethernet, Mini DisplayPort pass-through to Thunderbolt or non-Thunderbolt monitors and devices.

The LandingZone 2.0 LITE has dual USB 3.0 ports, which dock two USB devices at the same time for travelers and low-power users.

Most of LandingZone products are available through distribution from D&H Distributing Co. and Dr. Bott. They are currently available on Amazon, from LandingZone.net, and from selected retailers.

LandingZone is name of the unique line of docking stations developed by infiniWing, Inc. Founded in 2010 with offices in San Jose, CA, infiniWing, Inc is an adventurous Silicon Valley company building docking accessories for Apple users. LandingZone products are used worldwide by individuals, businesses, government and educational institutions. Like LandingZone on Facebook or follow them on Twitter @landingzonedock.