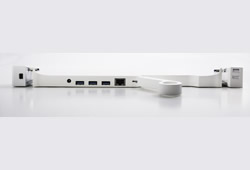 LandingZone Dock to be Available for Purchase in September

LandingZone Dock makes any MacBook a fully functional office machine by providing convenient access, utility and the ability to easily add peripherals.  It was designed for business users and road warriors who want to enjoy a rich laptop experience.

“MacBook Air and Pro products offer a superior mobile computing experience – and we have designed our line of docking stations to give anyone the ability to take their desktop experience wherever they go,” said Alan Penn, vice president, LandingZone. “With an array of ports and a lock slot, every member of the LandingZone family of products provides peace-of-mind and utility at an affordable price point.” The LandingZone Dock joins LandingZone’s line of docking solutions for the MacBook Air on display in booth #109 at CE Week. All are available for purchase at www.landingzone.net and Amazon and come with a one-year warranty.

The LandingZone 2.0 PRO for the MacBook Air (2012/2013 models A1465 + A1466) provides six ports: four USB 3.0 ports; one-gigabit Ethernet port and a Kensington lock slot to prevent theft. The Mini DisplayPort works with Thunderbolt and non-Thunderbolt monitors, and can support Thunderbolt hard disk drives.  It is available for the 11” and 13” MacBook Air.  MSRP: $199.

LandingZone is a small Silicon Valley company with big ideas. LandingZone 2.0 is a slim and sleek docking and locking solution developed for MacBook Air users who want to dock in a simple, yet elegant way.  Like LandingZone on Facebook or follow them on Twitter @landingzonedock.